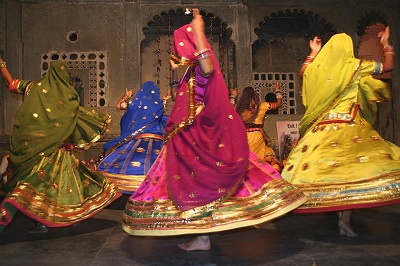 Padharo Sa Mhare Desh known as the land of kings, Rajasthan is one of the culturally rich states of INDIA with it. Since many rulers ruled Rajasthan ,each region has its own folk culture.The folk music and dance of Rajasthan are similar due to thier geographical confinement,but each differs in their unique style.  Folk dance and music is a vital part of Rajasthani culture.Kathputli, Bhopa,Chang,Tiratali, Ghindr,Kachchighori,Tejaji etc. are Rajasthani culture.Among all Rajasthani dances Ghoomar dance,Chari dance, Kachchi godi dance, Grahmin bhawai dance, Kathputli (puppet) dance, Fire danc and Kalbelia dance attracts everybody. 1. Rajasthani Ghoomar Dance Ghoomar is a traditional folk dance of Rajasthan. It was Bhil tribe who performed it to worship Goddess Sarasvati which was later embraced by other Rajasthani communities. The dance is chiefly performed by veiled women who wear flowing dresses called ghaghara. 2
Post a Comment
Read more